Your'e Sh*ttin' Me! You Haven't Seen That?!: The Return of the Living Dead II

If you get a sense of déjà vu watching Return of the Living Dead Part II, know that your reaction is normal, and others have felt a similar sensation. Writer-director Ken Wiederhorn carbon copies much from the original; and yet, Part II doesn’t operate like a sequel in the traditional sense. It doesn’t pick up where the 1985 release left off, nor does it contain the same characters.
In fact, it’s less a sequel than a remake or reboot by the modern definition, in that Wiederhorn tells ostensibly the same story but with different particulars. What’s strange is how he includes actors from the first movie; they play different characters this time, but on the surface, they’re playing the same roles. Moreover, other actors play roles similar to those originated in the first movie, such as the morbid mortician from the original who is replaced by the wacky doctor in the sequel, or the famous “Tarman” zombie appearing in both. None of it makes much sense in terms of continuity, but it’s pretty darn entertaining all the same.

An apt comparison would be Sam Raimi’s The Evil Dead (1981) and Evil Dead 2 (1987). Raimi shot his first cabin-in-the-woods horror yarn on a shoestring budget and tried for years to acquire distribution, turning his cheap film into a cult favorite on the midnight madness circuit. When he eventually received enough clout to direct a sequel, he reformatted the original story within the sequel rather than pick up where The Evil Dead left off, effectively eliminating the earlier film from the continuity. Rethinking the material for Evil Dead 2, Raimi delivered a bloody, over-the-top slapstick experience that laughed in the face of its predecessor’s comparatively gristly pure horror. The choice has baffled and entertained fans since, especially given the series’ increasingly comic-minded sequel Army of Darkness (1992) and the hilarious television series Ash vs. The Evil Dead.

When director Dan O’Bannon made The Return of the Living Dead, he wanted to do something innovative by telling the “real story” of what happened in George A. Romero’s Night of the Living Dead (1968). Wiederhorn didn’t have anything so meta in mind. Along with producer Tom Fox, Wiederhorn hoped to imitate the recent string of not-quite-family-friendly horror movies—Spielbergian titles like Gremlins (1984) and Monster Squad (1987) featured suburban children in peril, often with a young boy as the hero. Moreover, for the first time, youngsters could rent VHS movies and see R-rated material, and so they gravitated toward horror. A subculture grew. Nevermind that the titles above were rated PG-13 and could be attended by the target audience, whereas the target demographic of Part II was too young to buy an R-rated movie ticket. In some strange way, making an R-rated zombie movie starring a child seemed natural to Wiederhorn, and his backers, even it if makes no logical sense elsewhere.
Much like The Return of the Living Dead, bungled military transfers cause the zombie outbreak in Part II. A drum containing a weird bio-experiment falls off a truck and into a stream, where it’s carried along before running aground in a drainpipe. Enter our hero, the preteen Jesse (Michael Kenworthy) who, as he tries to evade two bullies, discovers the troublesome drum and, with a little tampering, he and the boys unleash a green gas that drifts into a nearby cemetery, where it reanimates dozens of corpses. Returning cast members James Karen and Thom Mathews, here playing a pair of dopey grave robbers named Ed and Joey, find themselves exposed to the green gas and facing down a swarm of zombies hungry for “Brains!” Ed and Joey gradually become sick, much to the dismay of Joey’s girlfriend Brenda (Suzanne Snyder). At the same time, Jesse’s sister (Marsha Dietlein) flirts with a young soon-to-be-hero cable guy (Dana Ashbrook), only to be interrupted by pesky brain-eaters.

Humor is at once the best and worst thing about Part II. Kenworthy’s spritely sarcasm might be the best reason to seek out the movie. He played a similarly rambunctious pre-teen boy in The Blob remake, also released in 1988. Returning cast members Karen and Mathews have some funny dialogue, exploiting the fact that this sequel isn’t a sequel: “I feel like we’ve been here before. You… Me… Them!” Less funny is how Karen and Mathews spend the entire second half of the movie screaming in agony, much like they did in the original, except even more exaggerated here (if you can imagine such a thing). But then again, like the original, their death cries alternate between funny and annoying. Elsewhere, Philip Bruns plays the resident doctor with as much subtlety as Charles Nelson Reilly; the less said about Bruns’ character the better. Some recurring zombies have speaking roles, including the detached head of a southern woman whose sassiness doesn’t hit the mark. And let’s not forget the stupid nod to John Landis’ “Thriller” music video in the climactic electrocution scene.

From a formal perspective, Part II might be notable for one reason: it’s an early credit for Oscar-winner Robert Elswit (There Will Be Blood), the virtuoso cinematographer behind most of Paul Thomas Anderson’s work. (We all have to start somewhere.) Just don’t expect any bravado displays of fluid camerawork or unique angles; the presentation is strictly straightforward. Likewise, J. Peter Robinson’s conventional score doesn’t compare to the memorable synth score of the original. Even the practical effects fail to surpass those in O’Bannon’s movie, particularly the dull animatronics and puppets, whereas the hordes of zombies look superior to the original’s.

Still, there’s fun to be had with Return of the Living Dead Part II, and a few memorable moments too. There’s the scene in which the zombified Billy (Thor Van Lingen), Jesse’s bully, receives a hug from his mother, and he takes a bite out of her skull—seeing this as a child, that moment put me off hugs for a while. Or consider the absurdly funny moment where Joey, hungry for brains, manages to convince his way-too-devoted girlfriend to give him a taste of her brains. And finally, look for comedian Doug Benson, then working as an extra, as a zombie who shouts “Brains!” and sounds suspiciously like Marvin the Martian. Part II has these and a few other worthwhile moments amid all the dull plotting, intentional overacting, and sloppy presentation. It’s a movie best reserved for “bad movie night” or not at all. 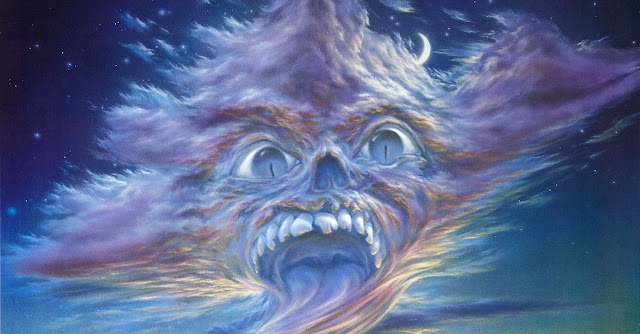