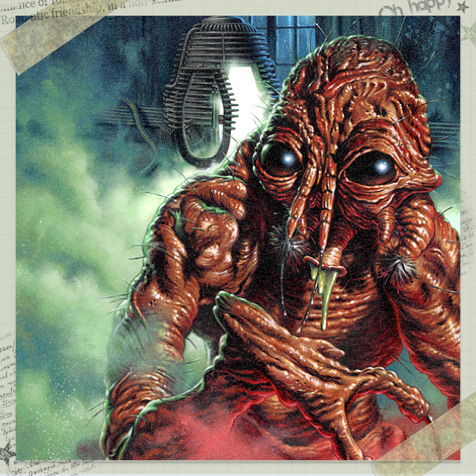 "I want to be the first insect politician." Few movies have ever been able to keep me up at night, but The Fly almost did it. To wash this movie out of my head, I had to watch Thor: The Dark World before turning in... although that atrocity gave me nightmares for a whole 'nother reason. Anyway, The Fly is possibly director David Cronenberg's most famous film, and is one of the few Hollywood remakes to actually fall into the category of "good."
Doing away with the campiness of the original, this film goes from romance to drama to full-on gross-out horror and back again. Its genre-blending is both its advantage and its downfall, but it's still a visceral, entertaining movie that has plenty of eyebrow-raising ickiness to make for a great evening rental.

I'm sure you've heard the story before: Boy meets girl, boy gets girl, boy becomes fly, girl kills boy (whoops, spoilers). Okay, it's not actually that simple. The Fly stars Jeff ah Goldblum as Seth Brundle, a scientist working on a transporter device that can beam objects from one spot to the other Star Trek-style. Geena Davis plays the reporter who interviews him, eventually falling for him. So, the science here is questionable at best. Sure, it's difficult to give a plausible-sounding explanation for a technology that doesn't exist yet, but it would have been nice to have more to this aspect of the movie other than "I have to teach the computer to know flesh." What does that even mean?

A lot of what the characters do and say makes no sense. For instance, Davis breaks up with her douchey boyfriend, but as soon as Goldblum starts becoming a fly, she turns to him for help. Why? Sure, she may need someone to talk to. But why turn to this fucker? The guy who, not 20 minutes previously, suggested that they see each other just for "casual sex?" I'm sure she had other people in her life to turn to. And then he ends up becoming the hero of the movie at the end? Ugh! Goldblum's character was so likable and tragic, and this guy was such a dick... and now we're suddenly supposed to root for him? Sorry, that's lame. Plus the editing for the dialogue is very, very bad. There are way too many awkward pauses in this movie when people are just talking to each other. 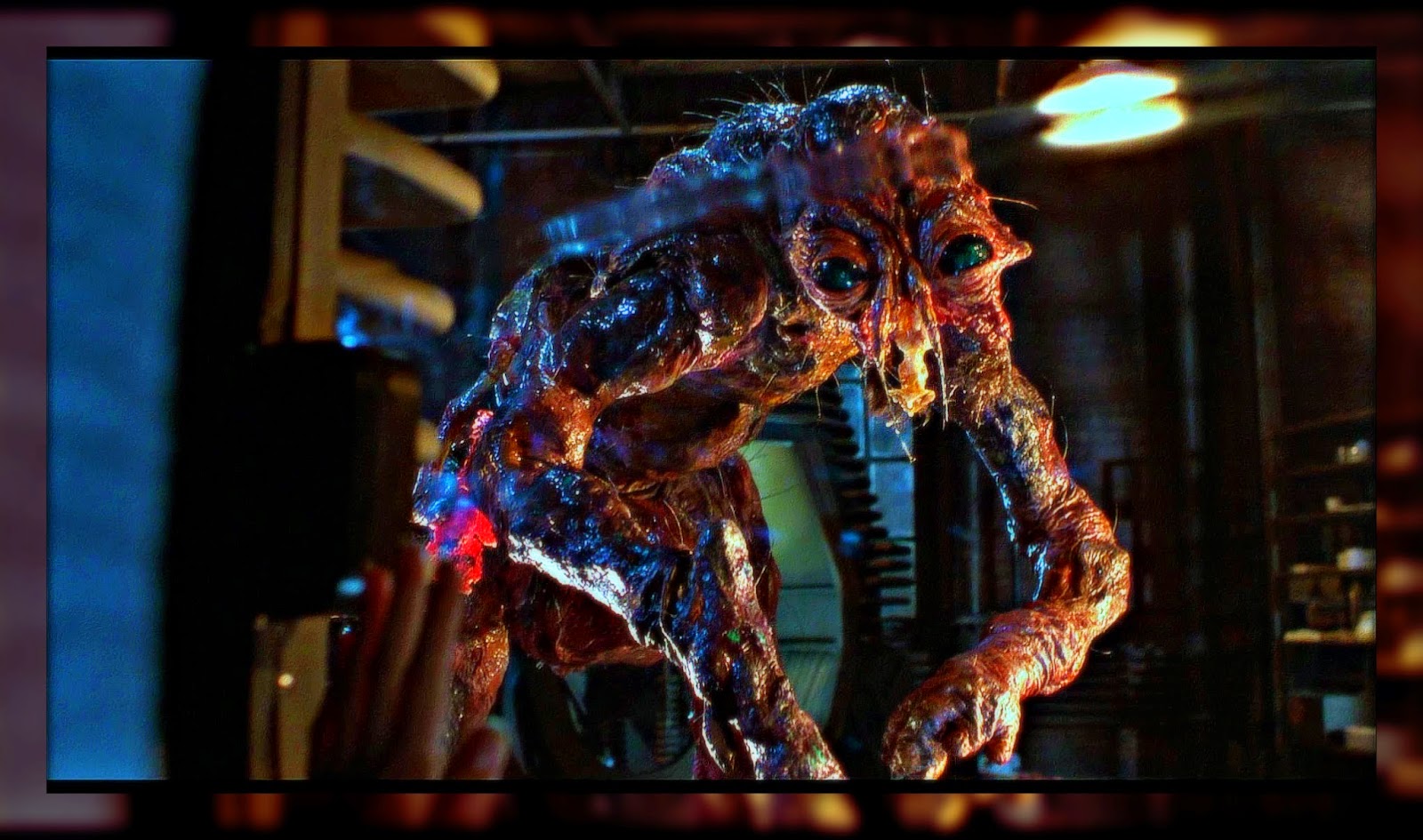 However, the fortunate thing is that the dialogue is almost unnecessary when you get to the full-on visual gall of this movie. It actually got me to feel sick to my stomach, a feat as yet unmatched by any other film (and before you ask, no, I have not seen A Serbian Film or The Human Centipede). The actual gore and makeup aren't even that much more frightening than in your typical horror flick, but the reason The Fly is able to disgust on such a visceral level is because we actually care about Goldblum's character. I've always said that there are five genres: Horror, drama, comedy, romance, and action. Well, really, there's a sixth: Tragedy. Nobody really pays much attention to this genre nowadays, as few films are made now that fit this bill, but The Fly certainly does. A lot of this is due to the story, and even more is due to Goldblum's accessible and realistic acting. Seriously, the guy knows how to craft a character, and even better, he can deliver the slightly stilted dialogue of this movie with poise and finesse. Even while feeling sorry for him, I couldn't help but laugh every time he said "Brundlefly."

I honestly wish I could give it more, as it's probably one of the wildest and most stylistically gory movies ever made (and the final scene is absolutely heartbreaking), but I can't really get past its poor dialogue and silly characters. Also, John Getz is not a good actor. Sorry, John Getz fans... all two of you. Still, I might end up raising this score higher after thinking about the movie for a while, because it's really not the kind of film that flushes right out of your head instantly... for better or for worse. I know that the moment when Goldblum fully becomes a fly is not something I will soon forget. Same with that maggot abortion dream sequence. Yeeeeesh. Anyway, if you've got a strong stomach for both gore and bad dialogue, I recommend this film. For everyone else... be afraid. Be very afraid.
at 12:22 AM
Email ThisBlogThis!Share to TwitterShare to FacebookShare to Pinterest
Newer Post Older Post Home