Your'e Sh*ttin' Me! You Haven't Seen That?!: Return of the Living Dead 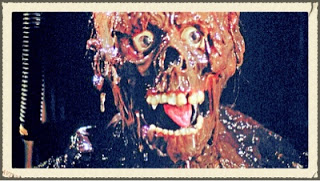 I already know that this flick is awesome so I don’t have to worry about it. What I forgot was just how awesome it was though! Really, there are only two good series of zombie flicks and that’s Romero’s of the Dead series and this one.
Two opposite sides of the coin with Romero always injecting some message to his flicks and the Living Dead film just delivering laughs, gore and a naked Linnea Quigley. This one also gave us Tarman, one of the greatest zombie characters ever. If you haven’t seen this one yet then you are seriously missing out on some of the best zombie action around.

Frank (James Karen) and Freddy (Thom Mathews) work at a medical supply warehouse. Frank has been there for years and Freddy is new so he asks Frank what the weirdest thing he’s seen there is. Frank relates a story about a chemical that brought the dead back to life. He then tells Freddy that the government contained it and accidently shipped the canisters to their warehouse. They head downstairs and wind up releasing the gas and the zombie in the canister. Everything that was dead in the warehouse is now alive including one cadaver, some butterflies pinned to a board and some dogs that were cut in half for use by veterinarians.

They call the boss Bert (Clu Gulager) to come and help them get rid of the one corpse in the warehouse. Unable to kill it by destroying its brain, they chop it up and head across the street to the crematorium but when they burn the body it releases the gas into the air. It starts raining and the gas begins seeping into the ground of the cemetery where Freddy’s friends have been partying while waiting for him to get off work. When the hundreds of corpses in the cemetery come to life it’s a race to see if everyone can survive.

And so begins one of the best zombie flicks ever. Not holding back on the humor, ROTLD is chock full of laughs and even manages to reference Night of the Living Dead when Frank tells Freddy that the movie was a true story based on the incident involving the chemical that is stored in their warehouse.

It’s a great nod to the classic flick that really started the zombie genre running, or shambling actually. The major difference here is that the zombies can talk. I’m going to assume this is where the zombie call of BRAAAIIINNNNSSSS began. Some of the zombies are also responsible for the best parts of the film too.

When they are finished choking down a couple of paramedics that show up, one of the zombies calls over the radio for more paramedics. Later in the film when some cops show up they do the same thing again, asking for more cops to come.

ROTLD is the only film where I will accept fast zombies as well. They’re a unique brand of zombie. Quick, able to talk and very intelligent. They wait in the forest by the sides of the road as the cops come in and as soon as they step out of their cars the zombies attack, quickly overpowering the cops and making them their next meal. So, they talk, they run and they hunt, the last ingredient they need is to look good and the flick delivers there. There are some great effects in the movie, Tarman being one of the highlights.

He’s a dripping, rotting, slimy looking thing and despite being in the flick for such a small amount of time he’s probably one of the most memorable parts of the film. In another scene there’s a great female corpse that burst through a window and munches one of the characters before she’s cut in half and dragged into the mortuary. They tie her down to a table and have a conversation with her to find out why the zombies want brains so much. This is one of the effect highlights as she squirms to get free and you can see her spine banging around on the table like a dog’s tail.

What would the film be without its great cast of characters? The punks that make up the group of Freddy’s friends are quite the bunch. Highlighted by Linnea Quigley being completely naked except for some boots for most of the film, they’re each memorable in their own way. It may seriously date the film but it makes sure that you’re not handed a bunch of generic players for the movie.

The zombies are outrageous, the characters are over the top and the movie itself is just as wacky all leading up to a great ending that is equal parts funny and sinister. It also sets up a sequel quite well and I’ll be watching that one tonight.

While Romero’s films may be classics, ROTLD winds up being more entertaining. This is the kind of zombie flick that you sit down with a group for. To think that I didn’t even realize that it had been 25 years since the film came out makes me sad. Why is nobody celebrating this one? I have seen very few zombie flicks that really do it well and this is almost the top of the heap. Hopefully I can help people remember that this great film is out there so go and rent it, buy it, borrow it or do whatever you have to do to watch this one. I promise that you won’t regret it! 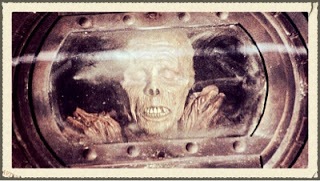