Jason is depicted as a corpse raised from the dead (same as JASON LIVES and NEW BLOOD) but not as a monster with extraordinary power like in NEW BLOOD or JASON LIVES but as a walking corpse risen from the depth of the water. Now this film occurs a year AFTER the events of NEW BLOOD, so you would think that the investigation from that film ACTUALLY happened so there would be an investigation, the camp would have been closed down, etc. HOW THE HELL DOES TWO KIDS GET A HOUSEBOAT OUT THERE! You'd think that maybe the camp would be closed down and all entrances to the camp would be closed up but no. these two kids manage to get a house boat out onto that lake.
In the flashbacks and in visions, Jason is depicted as a normal boy when he is in fact a mongoloid from 1-7 he is depicted as mongoloid. The only time(s) we see a mongoloid Jason Voorhees in this film, it is AFTER his drowning. Not before but AFTER! I'm sorry I didn't know drowning causes you to become mongoloid. 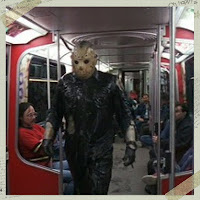 In Jason Goes To Hell (which DOES follow continuity) he is back at the camp grounds. Now yes there is a comic book that is supposed to bridge the gap between 8 and 9 but I don't buy it. At the end of Part 8 he is reverted to a child who would mean that he was destroyed. HOW he became an adult in such a small time is beyond me. Now there is a way to explain this. Rennie only saw him as a child after that. Jason being found at the bottom of the lake chained up, which follows the end results of Part 7, there is nothing that ties this movie to the previous seven. The retelling of the curse by Jim at the beginning of the film is admirable, but they couldn't even use footage from the older movies. They shot new stuff with that normal looking Jason! There is no consistency at all and the teleporting Jason thing has always bothered me.

I'd ask why they didn’t find Jason's body between Part 6 and 7.  It would be much easier to find a body hanging in the water then lying on the bottom under debris.  Both are unrealistic, but by this reasoning, part 7 is not part of the cannon.  As for the camp closing down, it had been before and reopened.  Remember, we don't see the camp in Part 7 so who says it was open then?  Between 6 and 7, Tina went from a kid to a teen.  Many years pass between 6 and 8 (the last time we see the camp open). 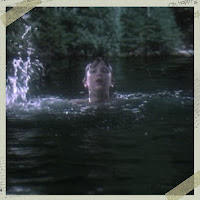 This movie is full of visions of Jason.  Why would the end not be a vision too?  Many "flashbacks" weren't actual scenes of Jason drowning or as a child.  They were their interpretations of the stories told to them.  They didn't know what Jason looked like.  Jason was a legend to these kids.  In fact, Mrs. Voorhees never saw Jason drown.  But she pictures it in her head in part 1.  It wasn't a scene of Jason actually drowning. 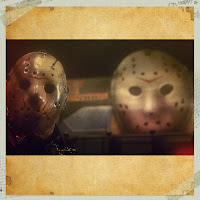 Again, Rennie saw many visions of Jason through the film.  Nobody is claiming that young Jason was actually running around the entire film.  At the end, the visions Rennie sees are dead...so we see a little boy laying in the water.  Way too deep for a Jason movie.  Don't take the scene literally. Also, we never saw Jason walk from the hospital to Crystal Lake in The Final Chapter.  Part V stated Jason was cremated.  Finally, Jason did show he can travel pretty far.  In Jason Goes to Hell, Jason walked from Youngstown Ohio back to Crystal Lake in NJ.  Not a quick trip. 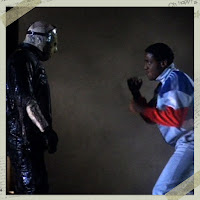 Jason knocks a kid's head off with one punch, seems like extraordinary power to me?

By the events of part 6-8 we have to believe that the town just doesn't give a crap about finding Jason's body. Each of the movies leaves Jason in a position that a pretty simple police sweep could wrap up. To buy into any of these sequels just have to accept that the town to covering up for Jason's activities. 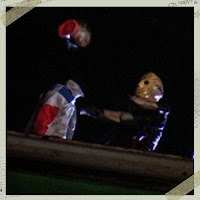 Over the course of the Paramount films various areas around Crystal Lake have been opened and closed for different reasons. It has also been established that there are many private and rental houses on the lake. So I don't think that it would have been impossible for the kids to get a houseboat on the lake, a bit of a stretch maybe, but all of the scenarios after part 3 have been a bit of a stretch.

Most of the Paramount F13 movies ended with some sort of a flashback/dream scene that was ignored by the next sequel, so I would put the toxic waste flood/turning into a child as a continuation of that trend. As for the NOES style flashbacks, they were Rennie's dreams not 'real' scenes. I personally would have liked to see the young Jason as mongoloid in these scenes, but dreams are just that persons vision of what happened. Poor decision by the filmmaker? Probably. Ruined the movie? Naaaaw... 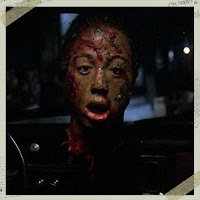 Personally I put JGTH in the non-canon category, as it spins an entire new mythos for Jason and adds mysterious new family members. But if you want to take JGTH as a legit sequel and buy into the body jumping necromican story, asking how Jason got back to Crystal Lake seems like a mute point? If the lake is his 'home' he would slowly lumber back there like homing pigeon. I can buy into that easier than the magic dagger/demon baby story?