Not only is this a terrific entry into the “Nightmare” series but it’s one of the few films I hold very near to my heart. The year was 1991, I was just a young lad of nine years old but I already had year’s worth of horror films under my belt (Thanks Grandma! Love you!) and the ability to reference them at any given time. What can I say? I was an unusual kid. While most were interested in playing sports and frolicking outside, I was interested in how the hell “Brundle-Fly” (“The Fly” 1986) looked so realistic on screen and how a doll was able to walk around with no wires (“Child’s Play” 1988). By 1991 I’d seen all the great horror icons of MY generation (I eventually developed a deeper catalog of horror icons from ALL generations) either theatrically, on VHS or cable.


Come to think of it, a majority of my family was involved in supporting my cinematic interest from a very early age… probably more than they should've been. Looking back, I have to wonder why the hell my Uncle would take me to horror matinees, why my Grandmother reminded me that “USA’s Up All Night” had a Friday the 13th marathon and why my mother allowed it. I guess family just has a way of knowing what path a kid was going down and fully embraced it. Man, I LOVE movies! 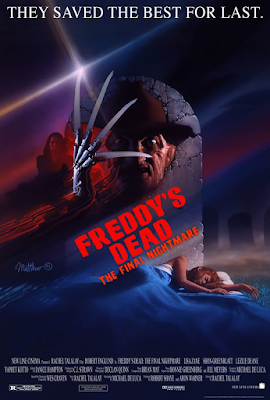 Here in St. Paul, MN (for readers outside the state) we used to have a theater called “CINA 5” (Awe! Just reminded myself of the “Signal Hill’s Theater”! Does anybody else remember that?) over on the Westside, it was just a block of a building, seriously, one big square. If memory serves, the concession stand was smack-dab in the middle of the theater while six screens surrounded it. I still remember walking in with my two older cousins and them making comments like “Damn, look at all these fines honeys!” (It was the 90’s…) and me actually looking for “honey”.

I remember this film so vividly because I and a few other cousins had attended a showing on opening night, which meant not only was I going to be the youngest but there was going to be A LOT of teenagers.

Looking around the theater, they always had the HUGE displays and banners for future films but this time one struck me as extraordinary, it was advertising “Freddy’s Dead: The Final Nightmare” in 3D!!! I ran up to the box office attendant to inquire about this godsend but before I could utter my question, she handed me my 3D glasses and pointed me to my theater. “Holy shit!” I thought as I opened the package to extend the ear flaps, it was there I seen an advertisement printed on one of the flaps for “House Party II”. “House Party II” AND “Freddy’s Dead”?! Did Christmas come early?! 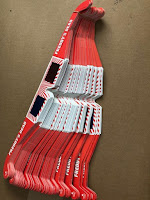 The lights dimmed, the reel rolled, my bladder twinkled- “Shit!” I had to pee… I ran to the restroom and went as fast as possible, no time for hand washing this time, Freddy was starting. I sat down in my seat but could hardly sit still and that’s when "Do you know the terror of he who falls asleep? To the very toes he is terrified, because the ground gives way under him, And the dream begins... “Appeared on the screen. This was is it, the movie started, no turning back now.

The movie opens in Springwood; damn near everybody is dead and all the teenagers have shat the proverbial bed. Freddy has no one else’s dream to haunt… except one lone survivor. We learn that Freddy is unable leave Springwood but that doesn't mean he can’t send a puppy of sorts to “go fetch.” John Doe, as he will come to be named, is pushed through a dream portal into another town to seek out fresh teenagers, but before John’s able to do that, he bangs his head on a rock and ends up with a case of amnesia. Eventually, he ends up in a center for juvenile offenders where he meets Spencer, Carlos and Tracy. Let me brief you on these misfits: Carlos’s mother beat the shit out of him so many times that the poor bastard went deaf, Tracy’s father was a lil’ too touchy feely and Spencer’s just a fuckin’ pothead.

Maggie (the main counselor) finds an old newspaper clipping in John Doe’s belongs and decides to take a road trip back to the town where the clipping originated from. Little did she know Spencer, Carlos and Tracy were hiding in the back of the van planning an escape from their would be prison. Freddy infiltrates Carlos’ daydream and all hell breaks loose from there. We find the gang in an abandoned, childless and aged town where we're treated to a cameo from Roseanne & Tom Arnold. John begins putting pieces together and comes to the conclusion the HE’S Freddy’s son. He couldn't be more wrong. Turns out before Freddy’s trial where he got off scot free of murder charges, child protection came through and took his… dun dun dunnnnnn… Daughter!

Now Freddy’s in full on “everybody dies” mode and partakes in some of the most creative kills in the entire series. My favorite kill involves Spencer getting high as giraffe nut’s, falling asleep and getting sucked into his own nightmarish video game. This is already cool but what really puts the icing on the cake is that Freddy is literally using Spencer as a character in a video game, power glove and all!

We're also given a pretty in-depth backstory of Mr. Krueger involving child murder, him murdering his wife and his harsh upbringing in  foster homes. It’s not until the last ten minutes that we are finally treated to 3D portion of the
film, which in my opinion, is the bee’s knees. Here we find out that just minutes before his grisly burning death, the “dream demons” offer him immortality which he happily accepts giving the “dream demons” the ability to continuously reincarnate him. With a little help from Doc, Maggie discovers that Freddy CAN be killed by simply pulling him out of the “dream world” and into the “real world”. After a horrific fight between Maggie, utilizing any and every confiscated weapon, (Freddy’s daughter) and Freddy, she eventually get’s him pinned to a steel gate and stabs him with his own knife welding glove! It’s shortly after, she stab’s Fred with a pipe bomb, lights it, kisses him on the cheek, says “Happy Father’s Day” and runs. Freddy looks down and then up to the camera, breaking the fourth wall and says “Kids”. BOOM!

I’d never seen anything like that as a kids, it still amazes me to this day that I was fortunate enough to see that theatrically. Of course, it lost a lot of its luster when it made its way to VHS and TV, obviously losing the 3D effect until 1999 when a box-set was released that not only included the original 3D segment but two pairs of 3D glasses to boot!